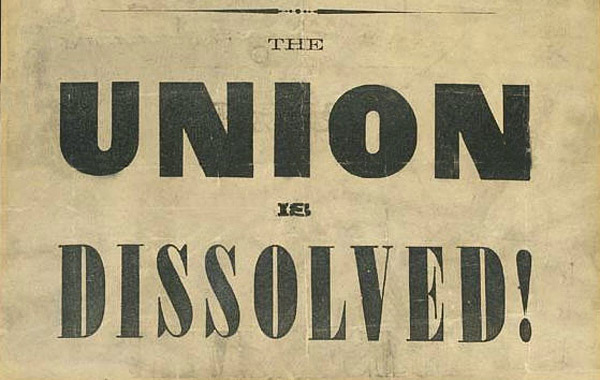 So now the nation was in a period of transition.  Abraham Lincoln would be the next president of the United States, but would not take office until March 4, 1861.  President James Buchanan's term was coming to an end.  He was a lame duck just marking time.

From The Coming Fury by Bruce Catton:


But there was still deep confusion and bewilderment, and in such times men of intense singleness of purpose can often drive through to their chosen goal and compel their fellows to trail along after them. The Southern men who, in November of 1860, proposed secession and the creation of a new nation had the advantage of knowing precisely what they wanted and of standing for immediate, emotion-releasing action. Those who counseled delay and full exploration of the possibilities of compromise were using the kind of talk that should have been (but was not) voiced in the presidential campaign; now it came too late, it had no force in it, and state and regional patriotism were generating a pressure that made it sound empty.


Lincoln had not advocated interfering with slavery in the states where it already existed. What put him at odds with the South was his stance on slavery in the territories. Lincoln vehemently opposed any expansion of slavery; if it could be contained where it was, it would eventually wither and die.  Some of those who wanted secession envisioned a new nation that stretched across the South and on into Cuba and Central and South America.

Also, to quote Alexander Stephens, Lincoln's election would "put the institutions of nearly half the states under the ban of public opinion and natural condemnation."  The mere existence of an administration hostile to slavery would spell eventual doom for the institution.

It had reached the point where Lincoln was already considering how to maintain the Union:  "My own impression is, at present (leaving myself room to modify the opinion, if upon a further investigation I should see fit to do so) that this government possesses both the authority and the power to maintain its own integrity.  That however is not the ugly point of the matter.  The ugly part is the necessity of keeping the government together by force, as ours should be a government of fraternity."

Secession threats were nothing new.  They had come at various times as different crises had arisen.  The last serious threat of secession had come in 1850 when the proposed admission of California and New Mexico to the Union as free states had caused regional strife.  Southern states sent delegates to a convention in Nashville.  It came to nothing, defused by the Compromise of 1850, but South Carolina delegates left Nashville convinced that cooperative action with other slave states was not the answer.  At the next crisis they would act alone and the other slave states would be forced to follow their lead.

The convention was called to order on December 17 in the state capital, Columbia.  Smallpox was rampant in the city at the time and the delegates voted to reconvene in Charleston and adjourned.  They arrived in Charleston the following afternoon. On Thursday, December 20, 1860, the convention heard the report from the Committee to Prepare an Ordinance of Secession:


We, the people of the State of South Carolina, in Convention assembled, do declare and ordain, and it is hereby declared and ordained, that the Ordinance adopted by us in Convention of the twenty-third day of May, in the year of our Lord one thousand seven hundred and eighty-eight, whereby the Constitution of the United States was ratified, and also all Acts and parts of Acts, of the General Assembly of this State, ratifying amendments of the said Constitution, are hereby repealed; and that the union now subsisting between South Carolina and other States, under the name of 'The United States of America,' is hereby dissolved.

As predicted, the other Deep South states followed South Carolina's lead. Mississippi seceded on January 9, 1861. Florida seceded the following day, and Alabama the day after that. Georgia seceded on January 19, Louisiana on January 26 and Texas on February 1.
Posted by Unknown at 3:22 AM