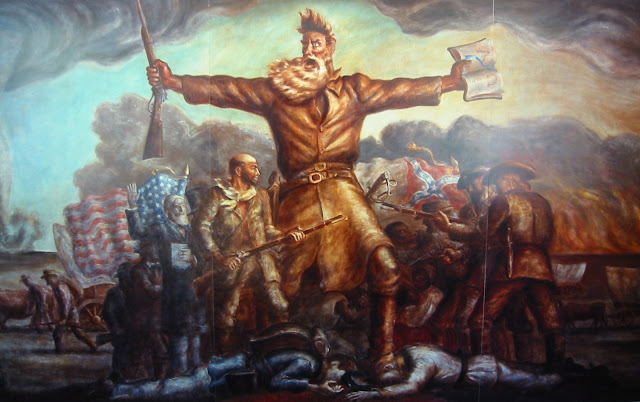 This post marks a new direction to this blog.  With the sesquicentennial of the American Civil War fast approaching, I'm embarking on a series of  posts that look back 150 years to what was happening then, a day-to-day accounting of the Civil War.  Posting will be light until...well, until 2011, when it actually is the 150th anniversary of the beginning of the Civil War, but there were a few different episodes of interest between 1859 and 1861 that I'll touch upon, starting with John Brown and his raid on Harpers Ferry...

On Sunday, October 16, 1859, the radical abolitionist John Brown and a group of followers seized the United States Armory and Arsenal at Harpers Ferry, Virginia.  Brown's plan was not to seize the arms and escape, but to hole up and arm the army of slaves that he expected would soon join him.

The abolitionist movement had been nonviolent, but John Brown was not.  He had been in the midst of the fight in Bleeding Kansas, killing five pro-slavery settlers in the Pottawatomie Massacre and fighting in the battles of Palmyra and Osawatomie.  Although Brown and his band of 38 men were routed in the latter battle, Brown achieve national recognition for his tactics and his bravery in the face of overwhelming odds.  He became a hero to the abolitionist movement, and when the fighting in the state subsided, he traveled to New England to raise money from influential supporters.  A group of fellow radicals, the Secret Six -- Franklin Benjamin Sanborn, Thomas Wentworth Higginson, Theodore Parker, George Luther Stearns, Samuel Gridley Howe, and Gerrit Smith -- gave him much financial support, often with no questions asked.

Brown arrived at Harpers Ferry in July of 1859.  Using the alias Isaac Smith, he rented a nearby farmhouse and awaited recruits.  Only a few showed up.  They hid out in the attic until they finally decided that no one else was coming.

After sundown on October 16, Brown moved on Harpers Ferry.  The original plan called for a brigade of 4500 men, but Brown had just 21, including three free blacks, one freed slave and a fugitive slave.  Brown left three men behind as a rear guard.  He had 200 Beecher's Bibles and almost a thousand pikes, and when he captured the armory he would have over 100,000 muskets and rifles for his slave uprising.

At first, the raid went well.  They cut the telegraph wires and captured the armory which was guarded by just a single watchman.  A party rode to the nearby Beall-Air estate and the Allstadt House, where they took several hostages, including Colonel Lewis Washington, a great grandnephew of George Washington.  The first casualty of the raid was an African-American baggage handler, Hayward Sullivan, who was shot and killed as he ran to warn the passengers of an approaching Baltimore & Ohio train.  The train continued on toward Washington, raising the alarm as it went. 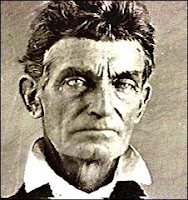 In August 1859, John Brown met with Frederick Douglass.  "Come with me, Douglass, I want you for a special purpose.  When I strike, the bees will begin to swarm, and I shall want you to help hive them."  But Douglass was convinced that Brown's was a suicide mission, that an attack against the federal government "would array the whole country against us." Plus, there was the matter of Harpers Ferry.  The arsenal was situated on a peninsula formed where the Shenandoah River met the Potomac, and surrounded by high ground.  It was perfectly indefensible and would change hands many times during the Civil War.  Brown was caught in a trap.

Early on the morning of October 17, armory workers discovered Brown's raiders and retreated to the hills to join with a growing crowd of townspeople, who were sniping at Brown's men.  Militia companies from Virginia and Maryland converged on the town.  One company charged across the bridge, cutting off Brown's only escape route.  Brown retreated with the surviving raiders and hostages to the fire-engine house.  He sent out his son Watson and another raider with a white flag, but they were shot down.  Four Harpers Ferry residents, including the mayor, were killed that afternoon.  In all, eight of Brown's raiders, including three of his sons, were killed.  The angry mob used some of the dead bodies for target practice.  Seven raiders escaped, but two were later captured.

President James Buchanan ordered a detachment of U.S. Marines to Harpers Ferry.  They were commanded by two cavalry officers, Colonel Robert E. Lee and Lieutenant J. E. B. Stuart.  They arrived during the evening hours.  One of Lee's first acts was to close the local saloons in an attempt to control the unruly mob. 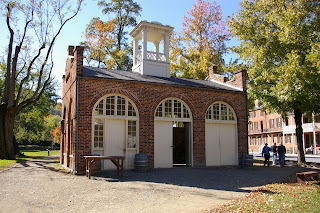 Soon after daybreak on October 18, Colonel Robert E. Lee sent Lieutenant J. E. B. Stuart forward to the Harpers Ferry engine-house (forever after known as "John Brown's Fort") under a flag of truce.  Lee's written demand to John Brown and the remaining raiders was immediate surrender.  John Brown refused, saying, "No, I prefer to die here."

Stuart gave a signal and a storming party of twelve marines, three with sledge hammers, began to try to break in the doors of the engine-house, but Brown had barricaded the doors with the fire engine and fastened them with ropes.  Lee sent in reserves.  A heavy ladder was used as a battering ram.  Finally, a small section of the door was knocked in.  The first marine through the opening was shot dead, but the rest of the storming party quickly subdued the remaining raiders.  Lieutenant Israel Greene cornered Brown and struck him several times in the head.  He then attempted to run him through with his sword, but it struck Brown's belt buckle and bent.  Within just a couple of minutes, the whole affair was over.  The raiders were captured and the hostages were freed.  The raid was over about 32 hours after it began.

Virginia Governor Henry Wise arrived at Harpers Ferry in the afternoon, accompanied by a group of reporters.  Brown was an instant celebrity and laid on the stone floor for hours answering all their questions.


I wish to say that you had better -- all you people of the South -- prepare yourselves for a settlement of this question. You may dispose of me very easily -- I am nearly disposed of now; but this question is still to be settled -- this negro question I mean; the end of that is not yet.

In the meantime, troops searched the Kennedy farm where the raiders had been hiding out since July.  They found a large carpetbag crammed full of letters from Brown's supporters, including the Secret Six.  It seemed as if the whole of the North were in on the attack.

Wild rumors circulated throughout the South of armed blacks and bands of abolitionists.  Lynch mobs howled for Brown's blood.  Although he had attacked a federal installation, he was was turned over to the State of Virginia.  At Charleston, on October 20, he was indicted on charges of treason, murder, and fomenting insurrection. 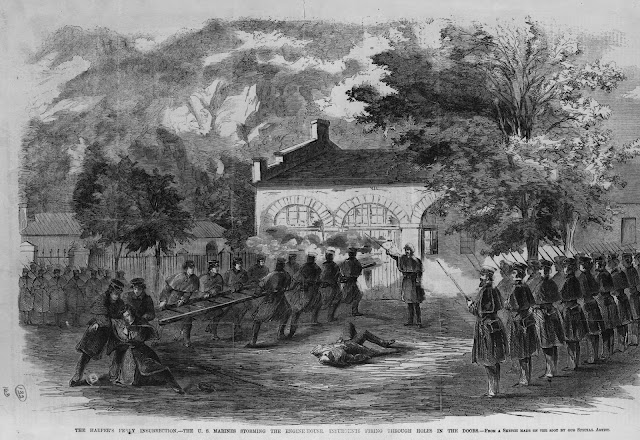