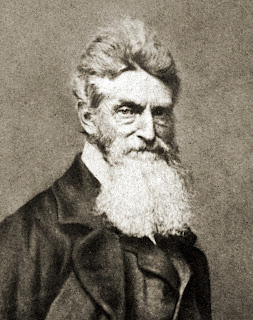 On Wednesday, November 2, 1859, John Brown was found guilty of treason, multiple first-degree murders, and inciting an insurrection among Virginia slaves. The charges stemmed from the raid on Harpers Ferry in October. The trial took eight days, and although the raid took place on Federal property, Brown was tried by the State of Virginia at Charles Town.

If John Brown had died at Harpers Ferry, the whole episode might have been just a curious footnote in the pages of history.  The real effect of the raid came as Brown wrote letters and gave interviews while awaiting trial.  Though not known for eloquence before, he rose to the occasion, and galvanized public opinion North and South, probably hastening the beginning of the Civil War. At one end of the spectrum of opinion was Henry David Thoreau's "A Plea for Captain John Brown"


It was his peculiar doctrine that a man has a perfect right to interfere by force with the slaveholder, in order to rescue the slave. I agree with him. They who are continually shocked by slavery have some right to be shocked by the violent death of the slaveholder, but no others. Such will be more shocked by his life than by his death. I shall not be forward to think him mistaken in his method who quickest succeeds to liberate the slave. I speak for the slave when I say that I prefer the philanthropy of Captain Brown to that philanthropy which neither shoots me nor liberates me. At any rate, I do not think it is quite sane for one to spend his whole life in talking or writing about this matter, unless he is continuously inspired, and I have not done so. A man may have other affairs to attend to. I do not wish to kill nor to be killed, but I can foresee circumstances in which both these things would be by me unavoidable. We preserve the so-called peace of our community by deeds of petty violence every day. Look at the policeman's billy and handcuffs! Look at the jail! Look at the gallows! Look at the chaplain of the regiment! We are hoping only to live safely on the outskirts of this provisional army. So we defend ourselves and our hen-roosts, and maintain slavery. I know that the mass of my countrymen think that the only righteous use that can be made of Sharp's rifles and revolvers is to fight duels with them, when we are insulted by other nations, or to hunt Indians, or shoot fugitive slaves with them, or the like. I think that for once the Sharp's rifles and the revolvers were employed in a righteous cause. The tools were in the hands of one who could use them.

The same indignation that is said to have cleared the temple once will clear it again. The question is not about the weapon, but the spirit in which you use it. No man has appeared in America, as yet, who loved his fellow-man so well, and treated him so tenderly. He lived for him. He took up his life and he laid it down for him. What sort of violence is that which is encouraged, not by soldiers, but by peaceable citizens, not so much by laymen as by ministers of the Gospel, not so much by the fighting sects as by the Quakers, and not so much by Quaker men as by Quaker women?

...Who is it whose safety requires that Captain Brown be hung? Is it indispensable to any Northern man? Is there no resource but to cast this man also to the Minotaur? If you do not wish it, say so distinctly. While these things are being done, beauty stands veiled and music is a screeching lie. Think of him- of his rare qualities!- such a man as it takes ages to make, and ages to understand; no mock hero, nor the representative of any party. A man such as the sun may not rise upon again in this benighted land. To whose making went the costliest material, the finest adamant; sent to be the redeemer of those in captivity; and the only use to which you can put him is to hang him at the end of a rope! You who pretend to care for Christ crucified, consider what you are about to do to him who offered himself to be the saviour of four millions of men.

At the other end was such as the Richmond Whig editors who wrote...


Though it convert the whole Northern people, without an exception, into furious, armed abolition invaders, yet old Brown will be hung! That is the stern and irreversible decree, not only of the authorities of Virginia, but of the PEOPLE of Virginia, without a dissenting voice. And, therefore, Virginia, and the people of Virginia, will treat with the contempt they deserve, all the craven appeals of Northern men in behalf of old Brown's pardon. The miserable old traitor and murderer belongs to the gallows, and the gallows will have its own

...and Mahala Doyle, whose husband and two sons were killed by Brown's men at Pottawatomie, Kansas...


Altho' vengeance is not mine, I confess that I do feel gratified to hear that you were stopped in your fiendish career at Harper's Ferry, with the loss of your two sons, you can now appreciate my distress in Kansas, when you then and there entered my house at midnight and arrested my husband and two boys, and took them out of the yard and in cold blood shot them dead in my hearing. You can't say you done it to free slaves. We had none and never expected to own one...My son John Doyle whose life I beged of you is now grown up and is very desirous to be at Charlestown on the day of your execution.

In Battle Cry of Freedom, historian James McPherson writes about how the reaction in the South was colored by "a paradox that lay near the heart of slavery."  Southern whites insisted that slavery was a benevolent institution -- that slaves were well treated and cheerful in their bondage -- but they always lived in fear of a slave insurrection.  For weeks after the raid wild rumors of uprisings swept across the South.  By the time Brown was executed, Southerners were able to breathe sighs of relief.  "The South's professed belief in the slaves' tranquility was right after all!  It was only Yankee fanatics who wanted to stir up trouble."

The jury was out only 45 minutes.  After his conviction, Brown made a statement to the court...


"I have, may it please the court, a few words to say. In the first place, I deny everything but what I have all along admitted, the design on my part to free the slaves. I intended certainly to have made a clean thing of that matter, as I did last winter, when I went into Missouri and there took slaves without the snapping of a gun on either side, moved them through the country, and finally left them in Canada. I designed to have done the same thing again, on a larger scale. That was all I intended. I never did intend murder, or treason, or the destruction of property, or to excite or incite slaves to rebellion, or to make insurrection. I have another objection; and that is, it is unjust that I should suffer such a penalty. Had I interfered in the manner which I admit, and which I admit has been fairly proved (for I admire the truthfulness and candor of the greater portion of the witnesses who have testified in this case), had I so interfered in behalf of the rich, the powerful, the intelligent, the so-called great, or in behalf of any of their friends, either father, mother, brother, sister, wife, or children, or any of that class, and suffered and sacrificed what I have in this interference, it would have been all right; and every man in this court would have deemed it an act worthy of reward rather than punishment. This court acknowledges, as I suppose, the validity of the law of God. I see a book kissed here which I suppose to be the Bible, or at least the New Testament. That teaches me that all things whatsoever I would that men should do to me, I should do even so to them. It teaches me, further, to "remember them that are in bonds, as bound with them." I endeavored to act up to that instruction. I say, I am yet too young to understand that God is any respecter of persons. I believe that to have interfered as I have done as I have always freely admitted I have done in behalf of His despised poor, was not wrong, but right. Now, if it is deemed necessary that I should forfeit my life for the furtherance of the ends of justice, and mingle my blood further with the blood of my children and with the blood of millions in this slave country whose rights are disregarded by wicked, cruel, and unjust enactments, I submit; so let it be done! Let me say one word further. I feel entirely satisfied with the treatment I have received on my trial. Considering all the circumstances. it has been more generous than I expected. But I feel no consciousness of guilt. I have stated from the first what was my intention and what was not. I never had any design against the life of any person, nor any disposition to commit treason, or excite slaves to rebel, or make any general insurrection. I never encouraged any man to do so, but always discouraged any idea of that kind. Let me say, also, a word in regard to the statements made by some of those connected with me. I hear it has been stated by some of them that I have induced them to join me. But the contrary is true. I do not say this to injure them, but as regretting their weakness. There is not one of them but joined me of his own accord, and the greater part of them at their own expense. A number of them I never saw, and never had a word of conversation with, till the day they came to me; and that was for the purpose I have stated. Now I have done."

Brown was sentenced to hang one month later on December 2, 1859.