May 9, 1860: The Constitutional Union Convention 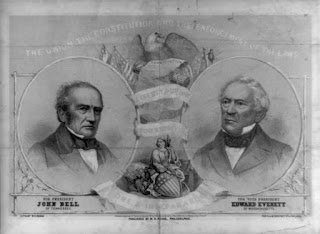 On Wednesday, May 9, 1860, a ragtag group -- remnants of the old Whig Party and a few Know-Nothings -- met in Baltimore.  They called themselves the United States Constitutional Union Convention, and nominated John Bell of Tennessee as their candidate for president.  The distinguished orator Edward Everett of Massachusetts was named their vice-presidential candidate.

There was no way Bell could be elected.  He and the party stood for moderation at a time when the nation was quickly dividing into extremes.  The hope was that he would win enough votes to prevent anyone else from winning, throwing the election to the House of Representatives, where cooler heads might come to a reasonable compromise.

The convention denounced political party platforms as frauds, then adopted a simple one of their own which pledged to uphold the Constitution, the Union and the Enforcement of the Laws.  The convention adjourned without a single mention of slavery in the territories or the fugitive slave laws, but John Brown was mentioned a couple of times in passing.

Bell, a wealthy slaveowner, was 64 years old.  He had spent much of his life in politics, beginning as a Democrat before a falling out with Andrew Jackson in the fight over the Bank of the United States.  He served in the House of Representatives from 1827 to 1841, and served as Speaker of the House from 1834 to 1835.  Bell did a brief stint as Secretary of War in 1841 under Presidents Harrison and Tyler, then served two terms as a senator from 1847 to 1859.

Bell was very popular in the border states, and his candidacy had an impact the following week in Chicago at the Republican Convention.  William Seward, the front-runner for the Republican nomination, was weakest in the states where Bell was strongest, and the Republicans, who needed almost a clean sweep of the Northern states, finally chose Abraham Lincoln as their nominee, deciding that he was the more electable candidate.