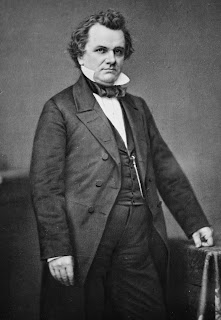 On Monday, April 23, 1860, the Democratic National Convention convened at South Carolina Institute Hall in Charleston to choose their nominee for president of the United States.  Some of the delegates hoped the party could unite around an electable moderate -- Senator Stephen A. Douglas of Illinois was the clear favorite -- but slavery, particularly the issue of slavery in the territories, made that impossible.

Douglas was unacceptable to most of the Southern delegates and a small minority, the fire-eating secessionists believed they could get everything they wanted, a new nation, if the party lost the election.

Historian Bruce Catton, in The Coming Storm, says of Douglas that he "was a man about whom no one could be indifferent.  He was either a remorseless scheming politician or a hero defending the eternal truth, the appraisal depending partly on the observer's point of view and partly on what Douglas himself was up to at the moment...Very few men either hated or admired him just a little.  A passionate man himself, he evoked passion in others, in his friends and in his enemies."

Slavery in the territories became the major issue in American politics following the Dred Scott decision.  Chief Justice Roger B. Taney declared in his opinion that Congress did not have the power to prohibit slavery in a territory.  The Fifth Amendment protected persons from being deprived of life, liberty, or property without due process.  Slaves were no different than any other property thus a ban on slavery was unconstitutional.  "And if Congress itself cannot do this—if it is beyond the powers conferred on the Federal Government—it will be admitted, we presume, that it could not authorize a territorial government to exercise them. It could confer no power on any local government, established by its authority, to violate the provisions of the Constitution."

Republicans declared this opinion to be an obiter dictum -- an opinion voiced by a judge that has only incidental bearing on the case in question and is therefore not binding.  They refused to recognize the ruling as a binding precedent and vowed to "reconstitute" the Court after winning the presidency in 1860.

Democrats were overjoyed with the ruling.  Southern Democrats felt vindicated that "Southern opinion upon the subject of Southern slavery...is now the supreme law of the land."  Northern Democrats called Taney's opinion "the funeral sermon of Black Republicanism," but were later discomfited to realize that slave property could never be excluded from a territory.

Douglas, a proponent of popular sovereignty, jumped into the fray with a speech at Springfield, Illinois, in June 1857.  He declared that the right of property in slaves was "a barren and worthless right" if the people of territory did not want it, if it was not "sustained, protected and enforced by appropriate police regulations and local legislation."

Lincoln began speaking of a pro-slavery conspiracy that was trying to "push it forward, till it shall become lawful in all the States," and began trying to paint Douglas as part of the conspiracy.  At Freeport, Illinois, during their senatorial debates in 1858, Lincoln pressed Douglas on the contradiction between Dred Scott and popular sovereignty.  Could the people of a territory exclude slavery if they wished?  From James McPherson's Battle Cry of Freedom...


Folklore history has portrayed this question as the stone that slew Goliath. If Douglas answered No, he alienated Illinois voters and jeopardized his re-election to the Senate.  If he answered Yes, he alienated the South and lost their support for the presidency in 1860.  The problem with this thesis is that Douglas had already confronted the issue many times.  Lincoln knew how he would answer the question:  "He will instantly take ground that slavery can not actually exist in the territories, unless the people desire it, and so give it protective territorial legislation.  If this offends the South he will let it offend them; as at all events he means to hold on to his chances in Illinois...He cares nothing for the South -- he knows he is already dead there" because of his opposition to Lecompton.  Lincoln asked the question anyway; Douglas answered as expected.  His answer became famous in retrospect as the Freeport doctrine.

Lincoln was right.  Douglas was already dead in the South because of Lecompton.  Faced with an estimated two-to-one majority of free-soil settlers, the pro-slavery legislature in Kansas set up a rigged constitutional convention.  Delegates would be elected, but pro-slavery sheriffs were charged with registering voters and pro-slavery county commissioners would choose judges of elections.  Free-soilers refused to participate in this farce.  With only 2200 of 9250 registered voters participating, pro-slavery delegates won all the seats to the constitutional convention at Lecompton.  They sent their pro-slavery constitution and a petition for statehood to Congress without a referendum.

The Lecompton constitution caused such an uproar that the convention had to relent.  They now mandated a referendum on two alternative slavery clauses -- "Constitution with Slavery" or "Constitution with no Slavery."  This seemed fair except that the "no Slavery" clause declared that "the right of property in slaves now in this Territory shall in no manner be interfered with."  It merely prohibited the future importation of slaves.  Douglas became one of the fiercest opponents of the Lecompton scullduggery, forever tarnishing his relationship with Southern Democrats.

In January 1860, the Alabama Democratic convention instructed its delegates to walk out of the national convention if the party refused to adopt a platform pledging a federal slave code for the territories.  Other lower-South conventions soon followed suit.  Jefferson Davis laid the groundwork in a series of resolutions to the Senate.

The showdown came to the platform committee where each state had one vote.  California and Oregon joined the slave states to provide a majority of 17 to 16 for a slave-code plank.  The minority reaffirmed the party's 1856 platform endorsing popular sovereignty and adding a pledge to obey Taney's Supreme Court decision.  This was not good enough for the South.  The whole point of Douglas's own Freeport doctrine was that the Court decision could not enforce itself.  Two days of partisan wrangling ensued with southerners as determined to pass a slave-code plank as Douglas men were to block one.  Finally, the Douglas men prevailed, passing the minority platform 165 to 138.  Free states voted for it 154 to 30.  Slave states voted against it 11 to 108.  Fifty delegates from the lower-South states promptly walked out of the convention.

Douglas's supporters were at first elated with the walk-out.  With so many of the senator's enemies gone, it would be easy to get enough votes from the delegates that remained.  Then Caleb Cushing, the chairman and no friend of Douglas, ruled that whoever was nominated must get the votes of two-thirds of the original delegation, not just those that remained.  202 votes were needed.  For three days and 57 ballots, Douglas never got more than 152 1/2 votes.  James Guthrie of Kentucky, Robert M. T. Hunter of Virginia, Joseph Lane of Oregon, Daniel S. Dickinson of New York, Andrew Johnson of Tennessee and others received votes.  Finally, on May 3, the delegates called it quits and adjourned the convention.  They would reconvene in Baltimore on June 18.

Meanwhile, the Southern delegates who had walked out met, on May 1, in Military Hall and declared themselves the real Democratic convention.  The majority group they had deserted was the "rump convention."  They appointed a chairman, Senator James Bayard of Delaware, and passed a slave-code platform.  Then they sat back to see what the "rump convention" would do.  Most were hoping for Douglas to remove his name from consideration so that a more palatable candidate could be selected.  Barring that, they would choose their own nominee.  When the "rump convention" adjourned, they were at a loss and also adjourned.