Summer and Fall 1860: The Presidential Campaign 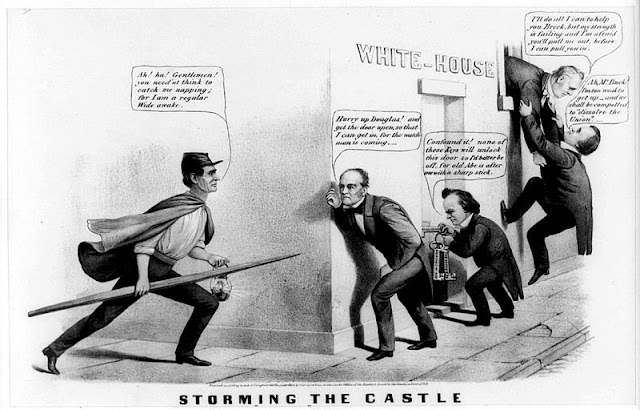 I've been doing a series of posts on the events that led to the Civil War.  This post will wrap up the series for awhile because everything ground to a halt during the summer and fall of 1860 with everyone looking forward to the presidential election in November.

Four candidates were vying for the office.  With the Democratic Party split in two (and with two Democratic candidates -- Stephen Douglas and John Breckinridge), Republican Abraham Lincoln looked like a sure bet, but it would take a lot of work to get him to the needed 152 electoral votes.  Lincoln would not even appear on the ballot in ten Southern states and would need to sweep most of the remaining states to keep the election out of the House.

This task would be complicated by the presence of the Constitutional Union Party and its candidate John Bell.  The party, mostly comprised of ancient Whigs and Know-Nothings, could not hope to win -- it was a party of moderates in a nation of extremists -- but it could play a spoiler role and keep Lincoln from winning.  They took no stand on the issues of the day.  Their party platform pledged simply for the Constitution, the Union and enforcement of the laws.

It seems rather quaint and odd now, but candidates did not do much campaigning back then.  They were expected to stay at home and let others do the work of campaigning for them.  They would appear statesmanlike, letting who and what they were speak for them, giving very few speeches to muddy the water, feigning ignorance of the excesses of their supporters. On August 8, 1860, there was a grand celebration in Springfield, Illinois, to celebrate the nomination of Lincoln.  Lincoln himself appeared just briefly, speaking only a very few words:  "It has been my purpose, since I have been placed in my present position, to make no speeches...I appear upon the ground here at this time only for the purpose of affording myself the best opportunity of seeing you and enabling you to see me...You will kindly let me be silent."  Then he rode away on horseback.

Douglas broke the mold, crisscrossing the country North and South to openly vie for votes, presenting himself as the only candidate strong enough to keep the Black Republican out of the White House and save the country from disunion.  Douglas was a formidable opponent and at the outset of the campaign appeared to have a chance of winning eight Northern states and one or two border states.

The Republicans met this challenge with vigor.  Lincoln would stay silent, but every other party leader was on the stump delivering an estimated 50,000 speeches.  It was the party of youth and youthful energy with a tremendous edge in first-time voters.  They organized themselves into "Wide-Awake" clubs and marched in grand torchlight parades, singing the party theme song, "Ain't You Glad You Joined the Republicans?"

The Democratic Buchanan administration would hand the Republicans a key issue to exploit -- corruption.  A House investigating committee compiled a large volume of frauds, graft and bribery of one of the most corrupt administrations in U.S. history.  It came off the presses in June 1860, and an abridged edition was quickly compiled and distributed by the Republicans for the campaign.  Some later Republican administrations would prove to be just as corrupt, but in 1860 the young party had an unsullied reputation and they were led by the man already known as "Honest Abe."

The Constitutional Unionists would shoot themselves in the foot.  Campaigning in the South, trying to prove themselves as dedicated to Southern rights as the Democrats, they embraced a federal slave code for the territories.  This led many Northern conservative ex-Whigs to vote for Lincoln as the lesser of two evils.

The key questions were:  If Lincoln were to win, would the Southern states follow through on their ever-increasing threats to secede?  The Republicans saw this as a bluff, an idle threat.  What would the federal government do if secession became a reality?  Douglas was the only one to address this issue, promising to "hang every man higher than Haman who would attempt by force to resist the execution of any provision of the Constitution which our fathers made and bequeathed to us."  Breckinridge, the most likely candidate for anyone wishing a breakup of the Union, challenged "the bitterest enemy I may have on earth to point out an act, to disclose an utterance, to reveal a thought of mine hostile to the Constitution and the Union of the States."

The election would turn into one of the strangest in American history, morphing into two separate contests:  Lincoln vs. Douglas in the North, and Breckinridge vs. Bell in the South.