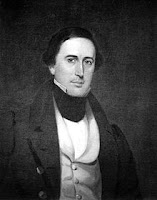 As Election Day 1860 approached, it became more and more apparent that Abraham Lincoln was going to be elected president.  The young Republican Party still needed to sweep most of the Northern states, to win all the states they won in 1856 plus a couple more.  They had their sights set on Pennsylvania and Indiana.  Those states held elections for state offices in October and Republicans won handily, virtually guaranteeing that the states would also go to Lincoln in November.

From Bruce Catton's The Coming Fury:


The governors were by no means unrestrained in their enthusiasm when they wrote their replies.  As political veterans they could not get very far ahead of local sentiment, and local sentiment had not yet hardened.  Governor John W. Ellis, of North Carolina, wrote that the people of his state simply had not made up their minds what to do in case Lincoln should be elected:  "Some favor submission, some resistance, and others would await the course of events that might follow."  They probably would not think a Republican victory, in itself, proper cause for leaving the Union, although they would never support "the monstrous doctrine of coercion."  From Louisiana came similar words.  Governor Thomas O. Moore would need more than "the deplorable event" of a Republican victory to make him advise secession, and he believed most people in Louisiana felt the same way.  He did think that Louisiana should meet with other slave states to "endeavor to effect a complete harmony of action," but he feared this harmony would be hard to get.  To be sure, if the Federal government tried coercion, the case would be different; meanwhile, Louisiana was totally unprepared "for any warlike measures," and her arsenals were empty.

Mississippi was a different case. Governor John J. Pettus felt that his people would do anything in their power to keep the state "from passing under the Black Republican yoke," but Mississippi could not go it alone. He would call a special session of the legislature as soon as it was known that Lincoln had won the election, and he believed Mississippi would ask a council of the slave states; if such a council advised secession, Mississippi would probably go along. In Georgia, Governor Joseph E. Brown believed that a convention of the people, meeting sometime between election day and March 4, would determine the state's course of action. In his opinion the people would "wait for an overt act" rather than vote to go out of the Union, regardless of what other states might do, simply because Lincoln was elected. Still, "events not yet foreseen" might lead to more immediate action. Governor Andrew B. Moore, of Alabama, favored consultation among cotton-state executives. He did not think Alabama would secede alone, but "if two or more states will cooperate with her she will secede with them; or if South Carolina or any other Southern State should go out alone and the Federal Government should attempt to use force against her, Alabama will immediately rally to her rescue." Governor M. S. Perry, of Florida, felt that Florida could not take the lead in secession, "but will most assuredly cooperate with or follow the lead of any single Cotton State which may secede." A state convention would be called as soon as Lincoln's election became a fact; meanwhile, "if there is sufficient manliness at the South to strike for our rights, honor and safety, in God's name let it be done before the inauguration of Lincoln."

Presumably these men knew how the people in their states were thinking, and it is clear that even in the heart of the cotton belt a majority was not yet ready to secede and would not consider Lincoln's election adequate reason for secession. But the majority by now was at the mercy of events. It had been brought -- by fear, by suspicion, and by anger -- to a point just one step short of the final act; the smallest accident, the most casual misstep by some politician in Washington, might compel it to take that last step. Nor would it be necessary for the majority in all of the Southern states to be won over. The sense of regional solidarity had immense power, and where one state led, other states might well follow.

South Carolina would lead. Governor Gist would see to it.