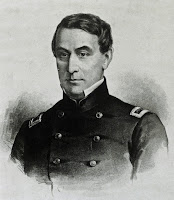 The Charleston garrison -- 10 officers and 64 enlisted men of Companies E and H of the U.S. First Artillery and the regimental band -- were all at Fort Moultrie, then the only active military base in the harbor.  The other forts were either obsolete or unfinished.

South Carolina state authorities put their secession plans in motion early in November of 1860, almost immediately upon the election of Abraham Lincoln, and the federal property in the state, everything from the forts that guarded Charleston harbor to the courthouses and post offices, quickly became a major issue.  The state's leaders wanted the United States to vacate the property or at least negotiate a sale price.

The Buchanan War Department was trying to placate the Charlestonians by replacing Gardner with Anderson, a Kentuckian.  Gardner had started a major row by attempting to move a supply of arms from the Federal arsenal in the town to Fort Moultrie.  On November 7, he sent an officer ashore with a boat to move the arms, but a large crowd gathered at the wharf to prevent the transfer.  Soon, most of Charleston was protesting to Washington.

Anderson, 56, was a 35-year veteran of the army.  He graduated from West Point in 1825, 15th in his class.  He fought in the Black Hawk and Seminole Wars, then in the Mexican War where he was wounded at Molino Del Rey.  In peace time, he served on War Department boards and translated several French texts on artillery into West Point instruction manuals.  He had a reputation as an industrious and energetic officer.