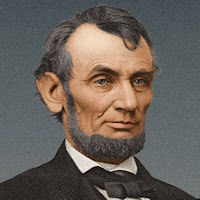 Tuesday, November 6, 1861, was Election Day, and Abraham Lincoln was elected the 16th president of the United States. Lincoln won 180 electoral votes, much more than the minimum 152 needed.

Lincoln won only 40% of the national popular vote, but handily defeated his three challengers. He won the election with a strong sweep of the northern states; he won 60% of the vote in the North while losing just two dozen counties.

Of the eleven states that would eventually secede, Lincoln appeared on the ballot only in Virginia. He finished fourth there with just 1.1% of the vote. In the four slave states that did not secede Lincoln came in fourth in Missouri, Kentucky and Maryland, and finished third in Delaware.

Southern Democratic candidate John Breckenridge won the rest of the south, eleven of the 15 slave states, for 72 electoral votes. He won 45% of the section's popular votes to Bell's 39%.

Northern Democratic candidate Stephen Douglas won 5-15% of the popular vote in most slave states and higher percentages in Northern states where he was Lincoln's main opponent.  In all, he finished second in the popular vote with 29.5%, but with his votes so scattered around the country he was able to win only 12 electoral votes, finishing last in that category.  He won the state of Missouri, and picked up three of New Jersey's seven electoral votes.

The split in the Democratic Party and the addition of the Constitutional Unionists don't appear to be big factors in Lincoln's win.  If all the opposition votes had gone to a single candidate in every free state, Lincoln would have lost only New Jersey, California and Oregon, and still would have won with 169 electoral votes.  In several states the opposition did try to unite behind fusion candidates, but there was too much animosity between the competing interests for much success.

The election of 1860 saw the second-highest turnout in United States history with 81.2% of the eligible voters casting ballots.  In 1876, 81.8% of the voters went to the polls.