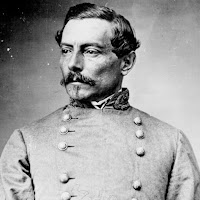 On Friday, March 1, 1861, Pierre Gustave Toutant Beauregard accepted a position as brigadier general in the Confederate Army and was assigned to command in Charleston, South Carolina.

Beauregard was born in St. Bernard Parish, Louisiana, on May 28, 1818.  He graduated second in his class at West Point in 1838.  During the Mexican War, he was wounded twice and received two brevets for gallantry while serving as an engineer in General Winfield Scott's army.  He spent most of his postwar military career constructing coastal defenses, but served as the superintendent at West Point for a few days in January 1861 before being removed because of his outspoken Southern views.  After Louisiana left the Union, Beauregard followed, resigning his U.S. Army commission on February 20.

During Beauregard's time as a cadet at West Point, Robert Anderson, who now commanded the Federal garrison at Fort Sumter, had been an artillery instructor.  Beauregard had shown such talent that Anderson made him an assistant instructor.