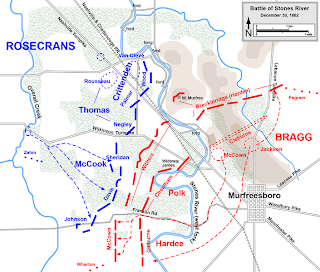 Union General Ulysses S. Grant spent most of November and December trying to get at the Mississippi River stronghold of Vicksburg. He was finally forced to give up the attempt after cavalry raids by forces under Nathan Bedford Forrest and Earl Van Dorn tore up his supply lines.

On December 13, at Fredericksburg, Virginia, Union forces suffered one of their worst defeats of the war when wave after wave of Yankee attackers were cut down in front of the stone wall at the base of Marye's Heights.

And in Tennessee, on December 26, William Rosecran's Union Army of the Cumberland left their base at Nashville to confront Confederate Braxton Bragg's Army of Tennessee near the town of Murfreesboro. The ultimate goal of this Federal campaign was to drive the Rebel army out of Tennessee, and, in the process, capture Chattanooga, a key strategic position where the railroad lines of the eastern and western sections of the Confederacy converged.

Rosecrans's campaign also had important political ramifications. The mountains and valleys of east Tennessee were filled with pro-Unionist yeoman farmers who detested the slaveholding secessionist aristocrats. On June 21, 1861, Tennesseans had voted by a 2-to-1 margin for secession, but east Tennesseans had voted against it by a 3-to-1 margin. President Abraham Lincoln had made liberating these Unionists a priority early in the war, but distance, logistics, and the forbidding terrain had hampered military operations. Now Rosecrans and his 42,000-man army were on the offensive.

Braxton Bragg's army was lined up in an arc just north of Murfreesboro. The Stones River, the Nashville Turnpike, and the Nashville and Chattanooga Railroad all sliced perpendicularly through his position. Bragg had about 8000 fewer men than Rosecrans, but a much more effective cavalry. On December 29, he sent Joseph Wheeler's cavalry off on a ride completely around the Union army to wreak havoc on Rosecrans's supply trains. Rosecrans kept coming, and by the next day had his army in line of battle confronting Bragg.

In keeping with their habit on naming battles after nearby towns, the Confederates would call it the Battle of Murfreesboro. The Federals preferred to name battles after nearby bodies of water; they called it the Battle of Stones River. (This naming preference would also apply to the names of armies. Confederates named their armies after the sections to be defended: the Army of Tennessee. Federals named their armies after rivers: the Army of the Cumberland.)

Both commanders planned similar attacks: attack the enemy's right flank and knock it back, and get into his rear, cutting him off from his base. If they had attacked simultaneously, the two armies might have spun around in a great circle, but Bragg beat Rosecrans to the punch.

The Battle of Stones River (Murfreesboro)

At dawn on December 31, 1862, 13,000 men massed on the Confederate left flank attacked, catching the Yankees at breakfast. Alexander McDowell McCook's corps took the brunt of the attack - two of his divisions were scattered.

Philip Sheridan, commanding McCook's third division, saved the Union army from disaster. Sheridan had his division awake and ready by 4:00 a.m. When the attack came, they were overwhelmed, but gave ground grudgingly and at great cost to the enemy - and themselves. More than one-third of his men were killed, wounded, or missing after four hours of fighting and all three of Sheridan's brigade commanders were killed.

Despite Sheridan's efforts, the Union right flank was driven back nearly three miles. During the crisis, Rosecrans was constantly on the move, riding from one danger zone to another to rally his men, barely pausing even when his chief of staff, Lieutenant Colonel Julius P. Garesche, was beheaded by a cannon ball while riding right beside him.

By noon, the Union line was bent back at almost a right angle. Bragg focused his attention on the angle at a patch of woods called the Round Forest. John Bowers, author of Chickamauga and Chattanooga - The Battles that Doomed the Confederacy, said of the ground that "if Bragg had studied the map for a year, he could not have picked a worse spot." Troops were sent across an open field, already littered with their comrades' bodies, to strike at an enemy dug into tree-lined fortifications.

A Mississippi brigade charged and fell, followed by a brigade of Tennesseans, who also fell. Finally, four brigades commanded by John C. Breckinridge, James Buchanan's vice president and a presidential candidate in 1860, went forward, attacking the position until nightfall. The Union army held.

During the night, Braxton Bragg wired news to Richmond of his army's great victory and the enemy's retreat. He was more than a little astonished when he woke on New Year's Day, 1863, and found Rosecrans's army still in his front. But the two armies were all fought out. All was quiet along Stones River expect for some desultory skirmishes. The most noteworthy action of the day was the occupation of a hill on the east side of the river by a Union division.

On January 2, Bragg ordered Breckinridge to clear the Yankees off the hill. Breckinridge vehemently protested the order. His men would have to cross open ground exposed to enfilading artillery fire from the west side of the river. When Bragg insisted, Breckinridge had no choice but to follow orders.

The attack went just as Breckinridge thought it would. His men swept forward and reached the Union line, only to be cut down by fifty-eight Union guns. The survivors were driven back to their original position by a Union counterattack. Breckinridge lost 1500 men in an hour.

Bragg mulled over his options. His army was exhausted, and more than a third of his men were killed, wounded, or missing. Recent rains were causing Stones River to rise. He feared being trapped where he stood. When he awoke on January 3 to find the Union army still in place, receiving reinforcements from Nashville, he ordered a retreat. He pulled his army back behind the Stones and Duck Rivers. The Union army was in no condition to pursue Bragg's army. They had suffered a casualty rate of 31 percent. Stones River was the most deadly battle of the war in proportion to the number of men involved.

Rosecrans went into winter quarters at Murfreesboro. After the failures at Vicksburg and Fredericksburg, the North was rejuvenated by the news from Stones River. Lincoln wired Rosecrans to congratulate him on his "hard earned victory which, had there been a defeat instead, the nation could hardly have lived over."