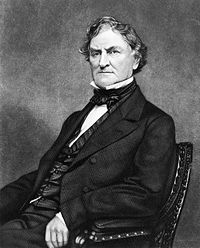 On Wednesday, February 1, 1860, the U.S. House of Representatives finally chose a speaker.  William Pennington, a Republican from New Jersey, was chosen by a majority of one vote.

With passions now fully inflamed from John Brown's raid and execution, the first session of the Thirty-Sixth United States Congress convened in Washington on December 5, 1859.  The first order of business for the House was to organize and elect a speaker, usually a routine task.

The newly-formed Republican Party had a plurality, but not a majority.  There were 109 Republicans, 101 Democrats, 26 members of the American Party, a few Know-Nothings, and one lone Whig.  On the first ballot, Republicans lined up behind John Sherman of Ohio, who was thought to be moderate enough to garner the votes of enough representatives to win.  Democrats backed Thomas S. Bocock of Virginia.  Neither man gained enough votes, a majority, because a few other candidates received a scattering of votes.

Before a second ballot could be taken, Representative J. B. Clark (D-Mo.) put forth a resolution "that the doctrine and sentiments of a certain book, called 'The Impending Crisis of the South -- How to Meet It,' purporting to have been written by one Hinton Helper, are insurrectionary and hostile to the domestic peace and tranquility of the country, and that no member of this House who has endorsed or recommended it or the Compend from it is fit to be Speaker of the House."

If the goal was to shut down the government, Clark's resolution was a brilliant political move. As historian Bruce Catton put it in The Coming Fury...

That did it...(F)rom the time the Missouri Congressman dropped his resolution into the hopper, the House of Representatives became completely impotent.  It could not elect a speaker, it could not get itself organized, it could not even vote the pay which its members needed so badly, until it had worn itself out in hot discussion of a book which, taken by itself, was hardly of minor importance.  The row to which it gave birth settled nothing whatever.  It simply registered (in terms that would be ratified in blood, a short time thereafter) the appalling height the American political fever had reached.  The irrational had become wholly logical."


In The Impending Crisis, Helper, a Southerner, denounced slavery, not because of any benevolent feelings for the slaves, but because of the harm he thought the institution was inflicting on Southern whites.  "Slavery," he declared, "lies at the root of all the shame, poverty, ignorance, tyranny and imbecility of the South."  The New York Tribune recognized the book's value to Republicans and published a favorable review.  Some Southern states made it a crime to circulate the book.  A Republican committee published an abridged version in 1859 with added captions such as "The Stupid Masses of the South" and "Revolution -- Peacefully if we can, Violently if we must."

When Clark urged the House to resolve that anyone who had endorsed the Helper book was unfit to be speaker, he knew that 68 Republicans, including almost every viable Republican candidate, had signed a circular advertising the compend, the abridged version of the book.  The debate over the resolution went on for week after week, with the language becoming increasingly incendiary and members coming to the chamber armed.  Sherman was forced to try to explain that he lent his name without knowing what he was endorsing:  "I do not recollect signing the paper referred to, but I presume, from my name appearing in the printed list, that I did sign it.  I therefore make no excuse of any kind.  I never read Mr. Helper's book, or the compendium founded upon it.  I have never seen a copy of either."

Finally, on January 30, 1859, Sherman had had enough and withdrew his name from consideration.  After a series of give-and-take deals, William Pennington was chosen as Speaker of the House by one vote.

From Catton's The Coming Fury:  "At various places in the North, ardent Republicans celebrated, firing cannon and making jubilant speeches, as if some sort of victory had been won; and if the House had in fact discharged the unendurable emotional tension that possessed it, so that it could now get down to business and give the nation orderly government, a celebration would have been in order.  But nothing had been settled.  One stalemate had been ended, but the greater stalemate remained:  the undigestible lump of slavery remained, and this one effort to cope with it had been a noisy and spectacular failure.  Only the extremists had gained anything."