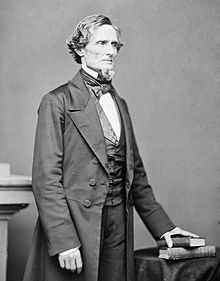 On Thursday, February 2, 1860, one day after the U.S. House of Representatives finally elected a speaker, Senator Jefferson Davis (D-MS) introduced a series of resolutions on slavery in the U.S. Senate.

In the first of the six resolutions, Douglas argued that the States had adopted the Constitution as "free and independent sovereignties" and that "any intermeddling by any one or more States, or by a combination of their citizens, with the domestic institutions of the others, on any pretext, whether political, moral, or religious, with the view to their disturbance or subversion, is in violation of the Constitution, insulting to the States so interfered with, endangers their domestic peace and tranquillity--objects for which the Constitution was formed--and, by necessary consequence, serves to weaken and destroy the Union itself."  In case there was any doubt, he made it clear in the second resolution that the main "domestic institution" he was talking about was slavery.  He went on to argue in further resolutions that slavery could not be limited in the territories.  Only after a territory was admitted to the Union as a state could the residents outlaw slavery, and any interference of the Fugitive Slave Act was "hostile in character, subversive of the Constitution and revolutionary in their effect."

Davis did not seem to care if the resolutions were adopted; the purpose seemed to be to undermine Senator Stephen Douglas's Freeport Doctrine and to introduce principles Southern Democrats could unite behind at the upcoming convention of the Democratic Party.  The resolutions would put Douglas, the expected Democratic nominee for president in 1860 in an impossible position if they could be adopted as the part of the party's platform.  Douglas could not and would not try to defend these principles in the North.

Douglas recognized the trap laid for him and questioned the need for the resolutions:  "There is no necessity for legislation; no grievances to be remedied; no evil to be avoided; no action is necessary; and yet the peace of the country, the integrity of the Democratic party, is to be threatened by abstract resolutions, when there is confessedly no necessity for action."

The resolutions eventually passed in the Senate, but not in the House.

When the Democratic Party's platform committee met later that year in Charleston, each state had one vote.  California and Oregon joined the slave states to provide a majority of 17-16 for a slave-code plank based on the Davis resolutions.
Posted by Unknown at 10:44 PM