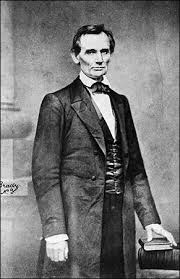 On Monday, February 27, 1860, Lincoln gave a speech at Cooper Union in New York City.  The speech laid the groundwork for him to eventually win the Republican presidential nomination at their convention in May.  In fact, historian Harold Holzer wrote a book about the speech and titled it, "Lincoln at Cooper Union:  The Speech That Made Abraham Lincoln President."

Lincoln accepted the invitation to speak in New York City in October 1859.  It was to be held at Henry Ward Beecher's Plymouth Church in Brooklyn, but the Young Men's Republican Union assumed sponsorship of the speech and moved it to Cooper Union.  Lincoln discovered this only after his arrival in New York City.

Several members of the YMRU, such as Horace Greeley and William Cullen Bryan, were opposed to William Seward, who was seen as the likely Republican nominee, and were casting about for alternatives.  Several other political figures declined invitations to speak, but this tall, ungainly Westerner, making his first address in the media capital of the country, delivered a well-researched speech that, according to Holzer, "skewered Stephen Douglas, deftly allied the Republicans with the Founding Fathers, promised the South he meant no threat to slavery where it existed, and then insisted that slavery itself was unmistakably evil."  He spoke before a crowd of about 1500 prominent New Yorkers, but newspapers spread his message across the Northeast and the rest of the country.  The speech transformed Lincoln into a national political figure.

The speech was in three parts.  Part One concerned the Founding Fathers and the positions they took on expanding slavery into the territories.  Lincoln showed that the Fathers were on the side of the Republicans.  Part Two was aimed at the South and argued that the Republican position on slavery was the "conservative" policy.  Part Three was aimed at Republicans and urged them to fight to prevent the expansion of slavery.  The speech did not contain many of Lincoln's usual rhetorical flourishes and is seldom quoted, but is known as his "right makes might" speech for a passage that came at the end:


Neither let us be slandered from our duty by false accusations against us, nor frightened from it by menaces of destruction to the Government nor of dungeons to ourselves. LET US HAVE FAITH THAT RIGHT MAKES MIGHT, AND IN THAT FAITH, LET US, TO THE END, DARE TO DO OUR DUTY AS WE UNDERSTAND IT.

After Lincoln's arrival in New York City, but before the speech, he visited Matthew Brady's photography studio on Bleecker Street.  The resulting image (shown above) would become known as the "Cooper Union Portrait" and would be the basis for campaign posters in the 1860 election.