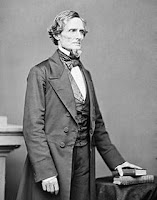 On Monday, January 21, 1861, five senators from the South left Washington, most notably Jefferson Davis of Mississippi. Their states had seceded; their services were no longer required there.

Davis had been ill, suffering from neuralgia and severe migraines. His doctor was amazed that he was able to go to the Senate. Davis's final farewell was a sentimental goodbye to his old Senate colleagues.


"I am sure I feel no hostility to you, Senators from the North.  I am sure there is not one of you, whatever sharp discussion there may have been between us, to whom I cannot now say, in the presence of my God, I wish you well."

In Boston, Massachusetts, abolitionist Wendell Phillips gave a speech in which he praised secession as a positive good. The sooner the slave states left the Union, the better.  Phillips was booed and hissed and had to have a police escort out of the hall.