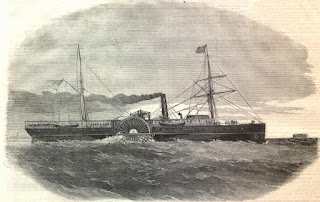 On Saturday, January 5, 1861, in New York, the Star of the West, a merchant vessel, sailed for Fort Sumter with supplies and 250 troops.

The original plan called for the Brooklyn to be used.  The Brooklyn, a 2000-ton, propeller-driven warship, boasted 22 9-inch Dahlgren smoothbores and two rifled pivot guns.  It could muscle its way into Charleston harbor if necessary.

But the plan changed.  The War Department decided to try speed and secrecy instead.

The Star of the West, a side-wheel merchant steamer normally on a New York-to-New Orleans run, was chartered for $1250 a day.  The soldiers and supplies were quietly loaded.  To the casual observer the steamer appeared to be leaving on its regular run.

Officials in Charleston got the news almost immediately.  By the time the Star of the West would arrive at Charleston harbor, Major Robert Anderson and the garrison at Fort Sumter would be the only ones who didn't know what was going on.

Also on this date, in Alabama, which hadn't yet left the Union, state authorities captured Forts Morgan and Gaines at Mobile Bay without resistance.