Armies: The Army of the Shenandoah (CSA) 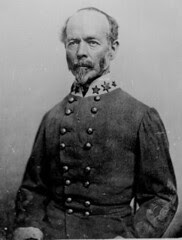 Image of Joseph E. Johnston by BattlefieldPortraits.com via Flickr

The Confederate Army of the Shenandoah was a short-lived unit.  It began as Virginia state troops that captured the U.S. Arsenal at Harper's Ferry in April 1861 and quickly grew into a 12,000-man force under the command of General Joseph E. Johnston.  The army merged with Beauregard's Army of the Potomac at the First Battle of Bull Run, and eventually this new, larger Army of the Potomac would become the foundation of the Army of Northern Virginia.

Major General Kenton Harper of the Virginia Militia was placed in command, and some 2000 state troops were quickly concentrated in the area.  Brigadier General Thomas Jackson succeeded Harper in command on April 28.

In May 1861, Virginia transferred her state forces to the Confederate government, and General Joseph E. Johnston took command of this force in the Shenandoah Valley.  By July, he had almost 12,000 men under his command.

This army was needed at Manassas to try to even up the odds as Union General Irvin McDowell advanced with the 35,000-man Army of Northeastern Virginia against the 20,000 men of General P. G. T. Beauregard's Confederate Army of the Potomac.

After the Confederate victory, the merger was made permanent.  On October 22, 1861, the Department of Northern Virginia was created with Johnston commanding.  It combined the District of the Potomac (Beauregard), the Valley District (Jackson), and the Aquia District (Holmes), and officially ended the Army of the Shenandoah.  Johnston's original Army of the Shenandoah would be a vital part of the new, larger Army of Northern Virginia.  Johnston commanded until he was seriously wounded at the Battle of Seven Pines when he was replaced by Robert E. Lee.